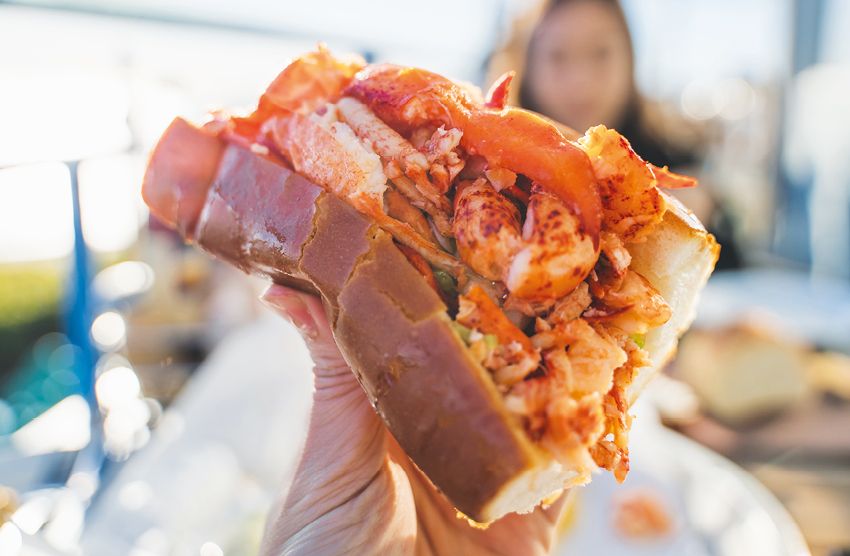 Treat your tastebuds to a tour of North America

So ubiquitous is the USA in our daily food choices it’s sometimes easy to forget that this huge country has an incredibly rich culinary tradition. We’re not talking haute cuisine here, we’re talking the big, brash, authentic all-American menu. What better and easier way could there be of sampling the very best of Uncle Sam’s kitchen than a region-by-region tour?

Is there a more romantic, evocative place in the USA than New England? I doubt it, the wild Atlantic coastline, windswept beaches, lonely lighthouses, ancient harbours housing memories of Moby Dick and Nantucket sleigh rides. The gold dappled woodlands of Vermont, home of Ben & Jerry’s Ice Cream and maple syrup is extraordinarily beautiful in the Fall but the real foodie action is nearer the coast. From Maine to Massachusetts the two grand staples are Lobster Rolls and Clam Chowder.

The lobster roll is to New England what the hot dog is to New York, the mysterious emulsified meat tube replaced with the altogether healthier lobster meat. Seasoned with salt and pepper, butter or mayonnaise and slathered inside a hotdog style long roll or bun its enduring popularity lies in the fact that it’s absolutely, delicious. Possibly the most famous vendor of this roadside classic is Red’s Eats in Wiscasset, Maine, a repurposed lobster shack with no indoor seating, it’s more food truck than restaurant. In peak season, expect to queue for over an hour for your sandwiched crustacean and side of fries.

Clam chowder is an ancient staple of these North American states and with each state, a different variation. In its simplest form clam chowder is cream-based with diced potatoes, onions, diced salt-pork, clams. Saltine crackers can be added to thicken or garnish the dish. As the recipe slowly migrated south, tomatoes replaced cream, while the Rhode Island has neither, preferring a clear broth. If you’re touring these west coast states, it would of course be remiss not to try them all.

No other city on earth has its character so closely associated with food, it’s even nicknamed the Big Apple. The city that never sleeps is also the city that loves to eat, New York has some of the most iconic dishes in the USA. Starting with its famous street food, although the hotdog is synonymous with the city it not the go to staple for New Yorkers. In fact, it’s fair to say that the allure of an orange tube of mystery meat, drenched in day-glo yellow mustard, nestled in a stale bun, has long gone. For an authentic New York street snack look no further than the humble pretzel. Brought over from Europe during the turn of the 20th century the pretzel is a long strand of dough looped into a distinctive knot. It’s traditionally seasoned with salt, soda and lye which gives the pretzel its distinctive glazed finish. There are a thousand variations but this plain and simple bread snack is a thing of salty beauty and should always be enjoyed in the open air. The bagel has followed a similar path to the pretzel but now occupies an altogether more lofty position in the food chain. Bagel shops such as Zabar’s in the TriBeCa district and Russ & Daughters on the Lower East Side are places of pilgrimage. The humble bagel is now a city institution with every imaginable filling to cater for every imaginable taste, a perfect snack for a melting-pot of cultures like NYC.

If New York is a melting pot then the deep south, New Orleans especially, is the supermarket of international flavours. The flavours here are intense, a tornado of French, West African, Afro-Caribbean, Spanish and Native American all swirling together to create the most memorable dished you’ll ever try. Gumbo is perhaps Louisiana’s most famous dish, there are a million ways of making this classic creole stew but the essentials are a rich dark stock, shellfish, meat, usually pork, sometimes thickened with okra, sometimes not. It’s more than just a hearty meal it’s a life-experience! Fried green tomatoes are basically cajun spiced sliced unripe tomatoes dipped in cornmeal and deep fried. Eat with a dip of your choice or pile them into a po’ boy sandwich, that’s another southern classic that entails toasted French baguette filled with fried crab meat, shrimp or oysters and lashings of Tabasco sauce. Grits are a uniquely southern invention, crushed or ground corn with the consistency of porridge, it’s a breakfast staple or a side dish to pretty much any dish you care to add it to.

California and the South West – Burritos and Bison

There was no mass migration across the pacific to the western seaboard of the USA so the ports and cities of California inherited the eating habits of settlers from all over the continent. TexMex is the dominant food fusion today and the burrito is the king of street food. A simple wrap of spiced beef, rice, guacamole, tomatoes and cheese, usually Monterey Jack, is the go-to snack in this sunny state. Los Angeles has award-winning food trucks galore, many of which draw huge crowds as their popularity on social media catapults them to fame. Further north in San Francisco seafood reins supreme, the famous Fisherman’s Wharf caters to those in search of its famous Dungeness crab, oysters and shrimp washed down with ice-cold local craft beer. The original red meat of choice in the south west going back in time was buffalo (which are technically bison but what with so many songs having been written and towns named it’s a bit late in the day for pedantry). Buffalo can still be legally hunted and eaten in the US and it’s not too hard tto track down a buffalo burger.

Gareth lived and worked in the Middle East for many years mainly Bahrain, Beirut and Dubai. Favorite travel moments include dhow sailing in Zanzibar, touring the Faroe Islands by helicopter, trekking remote canyons in Oman and sleeping on reindeer skins at the Ice Hotel in Sweden’s arctic circle. A love of the mountains always takes him back to his hometown in Snowdonia.

Why choose a Titan Travel tour or cruise?

Our award-winning collection of holidays covers all seven continents, with carefully planned itineraries ranging from rail journeys and river cruises, to small-group adventures and trips exclusively for solo travellers.

Smooth transfers to and from home with unlimited mileage